Gondar, the royal city or the Camelot of Africa 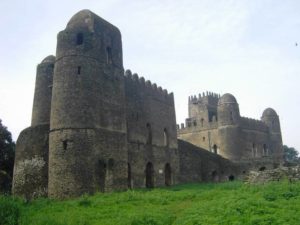 The town was founded by the emperor Fasiladas in 1636.  It was in the 17th century the capital of Ethiopia.

Gondar is located in the Amhara Region in the north of the Tana Lake and in southwest of the Simien Mountains. The town is famously known for its amazing castles and churches.

The city contains a large compound with several castles built by various emperors.

You will also discover the Bath of Fasiladas, where once a year the big basin is filled water for the big Timkat celebration and the ruins of the palace of Kusquam which are located out of Gondar.

Ancient sites demonstrate a remarkable convergence of the Ethiopian Orthodox Church with Ethiopian Jews and Muslims.

There are also Hindu and Jesuit influences. 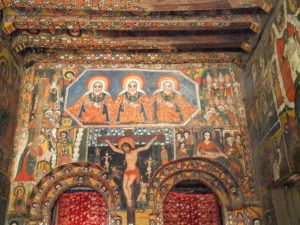 Besides the castles and the bath of Fasiladas, an another major church for Ethiopian people, Debre Berhan Selassie (Light of Trinity), which is located  on the summit of a hill and surrounded by fortified walls.

The interior is decorated with beautiful frescoes dating back to the 16th century.

The walls depict biblical scenes and saints. The ceiling is covered with the face of hundred angels.

Icons of the Holy Trinity (three identical men with halos) and the Crucifixion have pride of place above the entrance to the Holy of Holies.

Visit Gondar with us :