You are here: Home1 / Sights2 / Lalibela

Lalibela, one of Ethiopia’s holiest cities

Famous for its medieval monolithic, rock-hewn churches that are still today a place of pilgrimage and devotion. 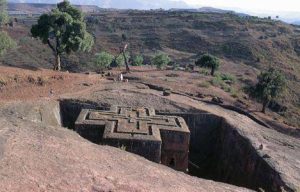 The city of Lalibela is located at a height of 2,600m above sea level and is, together with Axum, one of the two most important holy cities in Ethiopia because of its famous rock-hewn churches, the largest monolithic rock-hewn buildings in the world.

The city was constructed by King Lalibela of the short ruling Zagwe Dynasty after the fall of the Axumite Empire around the 11th century.

In only 40 years and, according to the legend, with the help of angels, the churches were carves out of the red granite rock of the Lasta Mountains in order to become a “New Ethiopian Jerusalem”.

The churches are divided into two groups according to their location on both sides of the river called Jordan or Yordanos. Many of the churches are connected with each other by means of narrow underground passages.

In the caves and passages and in the churches, priests and monks can be found reading the Holy Bible and praying. Each church has its own unique architectural style but they are all superbly sculptured and most are decorated with wellpreserved paintings.

The most elaborate and most famous church is the Bete Giorgis church, in the shape of a perfect Greek cross.

Lalibela, a religious and pilgrimage centre 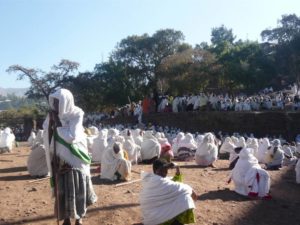 To this day, the churches are still being used for services and celebrations among the local believers and on big festivals like Fasika (Easter) or Timket (Epiphany), many pilgrims come to worship at this holy site. The city and its churches are considered as one of the wonders of the world and have been declared World Heritage Site by the UNESCO.

Lalibela is no more than a tiny village; the traditional two-story round houses dominate the center of the mountainous site. Modern and comfortable hotels are available in Lalibela, some of which present fascinating architecture and fascinating view over the mountains of Lasta.

Outside of the town center of Lalibela 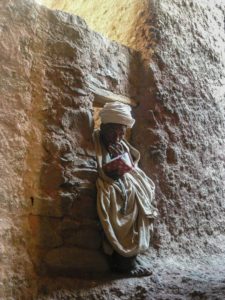 More interesting churches and monasteries can be found. Only a short way out of town, the Neakto Leab monastery was built up in a half- open natural cave by the last ruler of the Zagwe dynasty.

On the slope of Mt. Abune Yosef (4190 m), the high mountain just behind Lalibela, the Asheton Mariyam church can be visited by riding on a mule’s back or trekking, offering amazing views. In a 45 minute drive from Lalibela, the rock church Geneta Mariam and the monastery Yemrehanna Kristos can be reached and visited.

Visit Lalibela with us :