The Danakil Depression,  an ideal travel destination for real adventurers

The Danakil Depression is an amazing place situated in the northeast corner of Ethiopia, and is itself part of the big Afar Depression.

The Danakil occurred when three tectonic plates came together with unique and stunning geological results.

The whole area is below sea level and is believed to be the hottest spot on earth in terms of its average annual temperature.

The Danakil’s unique geological interest is worth seeing and so are the Afar people who have been living in this environment under duress for many centuries. 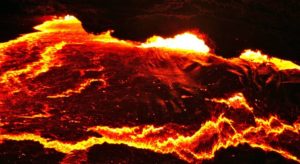 Isolated in the midst of the Danakil Desert, Erta Ale is the hottest and most hostile desert on earth.

Erta Ale is a 50km wide shield volcano which reaches 613 metres at its highest point and hasn’t stop erupting since 1906.

The lake levels fluctuate, with the lava tumbling into the caldera when it flows over. 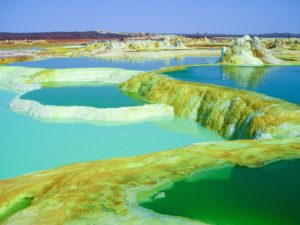 Its difficult access and scorching climate make it twice harder to get to.

The Dallol is an incredible combination of volcanic activity and hydrology. In the local Afar language, Dallol means ‘desintegration’ or ‘dissolution’, a passing reference to the volcan’s acid hot springs.

This volcanic site lays to the northern tip of a saline lake, Lake Karum.

The Afar people still mine the salt to this day.

The lake is the result of large magma chamber of the Great Rift Valley over a vast saline area to the west of the Red Sea and lays 136.8 meters below sea level in the Danakil Depression.

Temperatures are routinely as high as 45°C in the shade.

This vast desolate area is known for its strange geological formations, including acid hot springs, mountains of sulphur, pillars of salt, small fumaroles and pools of acid isolated by salt ridges and concretions of evaporate, sulphur, chloride acid magnesium, and brine solidified.

This already surreal landscape is set against a white, yellow, green and red ochre background, as a result of strong sulphur, iron oxide, salt and other mineral deposits.

Dallol and Erta Ale are the outcomes of the Arabian plate and the African plate both pulling apart and the Red Sea Rift being created. 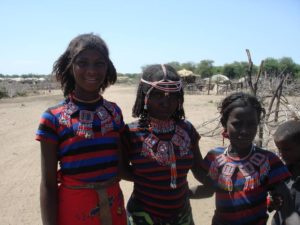 The whole region up to Awash in the east of Addis Ababa, is inhabited by the Afar people, proud and beautiful nomadic herdsmen.

They can be seen along the roads with camel caravans, bringing salt bars to the highlands.

The Danakil is where Lucy, a small 3.2 million-year-old hominid skeleton, was uncovered in 1974.

Travelling through the Danakil Depression 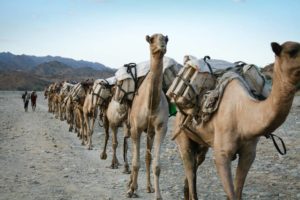 Travelling through this harsh and extremely hot environment is not something that everyone can easily handle.

A triangular circuit containing at least the Asale salt mining, the Danakil Depression and a night time hike to the astounding Erta Ale active volcano is all worth the effort.

The trip to and through the Danakil can be started from Mekelle or from Semera.

An official entrance permission has to be obtained before the trip and the company of armed guards and a pathfinder is obligatory.

Visit Danakil with us :