You are here: Home1 / Sights2 / The Great Rift Valley

The Great Rift Valley : the single largest geographical feature on the African continent 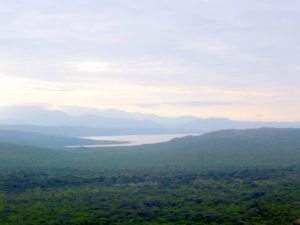 The Rift Valley stretches along a 4,000 km long fault line stretching from the Red Sea south to Mozambique’s Zambezi Valley.

The Ethiopian portion of the Rift Valley runs forms the Red Sea to Lake Turkana on the Kenyan border. In northern Ethiopia, it forms the Danakil Depression, and inaccessible and inhospitable desert that dips to an altitude of 116m below sea level, one of the lowest points on the earth’s surface.

South of the Danakil Depression, due east of Addis Ababa, the Rift narrows around Awash National Park to bisect the Ethiopia as Eastern and Western Highlands.

The southern part of the Ethiopian Rift Valley is lower, warmer and drier than other densely populated parts of the country. Covered in acacia woodland and studded with lakes.

The six main lakes of the Ethiopian Rift formed during the last lce Age, originally as two large lakes. 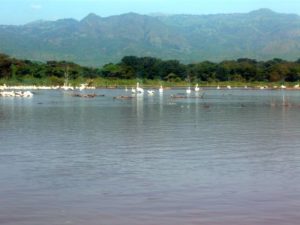 The lakes cover the bottom of the Rift Valley stretching from Djibouti to Mozambique with a width of 50km. All the Lakes are full of fish like Tilapia and Nile Perch and thus attract many different bird species, making them a paradise for bird watchers.

Coming from Addis Abeba, you first pass Lake Koka and Koka Dam which provides electricity for the capital.

After passing Lake Koka, the first Rift Valley Lake comes into view : Lake Ziway where you can observe many birds such as white pelican, saddle bill, yellow bill, storks and kingfishers. Hippo’s can also be seen.

Traveling further to the south there is an excellent opportunity to relax at the shores of Lake Langano.

This lake with its reddish brown water is free of Bilharzia, so it is safe to swim. There are several good hotels and lodges in a beautiful setting where you can relax on the sandy shores and where boats, pedal boats, fishing equipment and cycles can be hired.

It is an ideal base to make trips to the nearby Lakes Shala and Abiata. 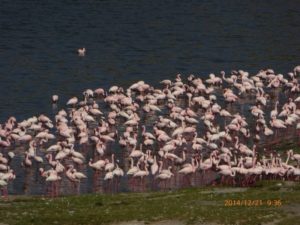 It hosts an extraordinary number of birds like wild duck, geese, cormorants, flamingos and great numbers of Great White Pelicans. These pelicans come only to Abiata to feed; they nest and sleep on islands in neighbouring Lake Shala.

These islands are home to the most important breeding colony of Great White Pelicans in Africa.

Lake Shala which is a crater lake has many bays fringed with wild fig, acacia and euphorbia, overlooking dark waters which are the deepest in Ethiopia, 200 meters or more. It breathes an untouched, mysterious beauty. In its surroundings several sulphurous springs bubble up.

There is not much wildlife around the lakes but the beautiful Grant’s gazelle and different species of monkeys can regularly be seen. 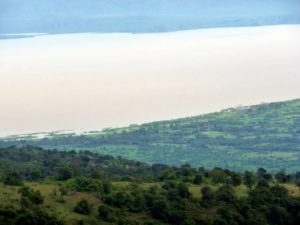 Standing out from the blue-coloured Lake Chamo, the red-copper-tinged Lake Abaya owes its particular hue to iron particles in suspension in water.

High on from the near city of Arbaminch is one of the most commanding panoramic views Ethiopia has to offer.

The ridge of land that separates the two lakes is called “Bridge of Heaven” by the local population. 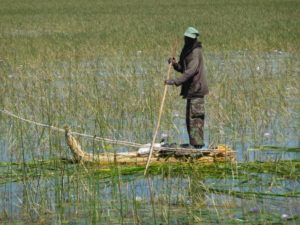 Awassa is a thriving and attractive town. It has avenues lined up with tree, numerous shops and stores, including tea salons that serve outstanding fruit juices. The sunset and multitude of birds flying can be observed from the lakeside.

Awassa city and Awassa lake are a genuine haven of peace. Reed and marshes are found at the edges of the lake, itself surrounded by high hills.

Fishermen fish tilapia, Nile perch and catfish at night. At dawn, they all come together at the lakeside town market to sell their night catch.

Fishing is the main local industry and the fish market is something you mustn’t miss out.

Visit the Great Rift Valley with us :