Axum, one of the oldest continuously inhabited places in Africa

Massive ruins dating from the 1st and 13th century AD include monolithic obelisks, royal tombs and ruins of ancient castles. 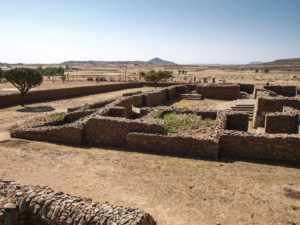 The ancient kingdom of “Aksum”

The origins of this ancient city are lost in legend.

About one thousand years before Christ it is believed that some tribes originally from southern Arabia settled on this side of the Red Sea.

One of these tribes was known as the Habashat (the possible origin of the names “Abyssinia” for the country and “Habesha” for the Ethiopians).

This particular area is however linked to the legend of the enchanting Queen of Sheba, who after having visited King Solomon in Jerusalem, gave birth to Menelik I on her return. He was the founding father of the Ethiopian royal family known later as the “Kings of Kings”.

Local legend recounts how in the first century A.D. Axum was founded by the brothers Abreha and Atsbeha. From the fourth century we have first historical records of the rule of King Ezana. He converted to Christianity after the arrival of Frumentius, who was sent by the Patriarch of Alexandria and who later became the national saint, Abba Salama, (Father of Peace). 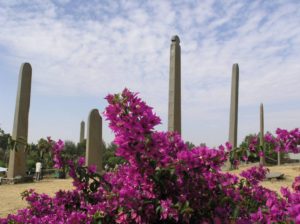 Stelae  and the Obelisk of Axum

Axum was the capital city of the longstanding Axumite Kingdom for almost a thousand years.

The ruins still visible in Axum stand as testimony to an exceptionally high level of civilization, notably the stone monoliths which are dotted throughout the city.

Most of them are still standing, only the biggest, once 35 m high monolith has fallen and is broken.

These stones are among the most mysterious monuments in the world and have been declared World Heritage Site by the UNESCO.

One of the largest steles, which had been taken away by the Italian occupants has been brought back to Axum recently.

The spiritual capital of Ethiopia 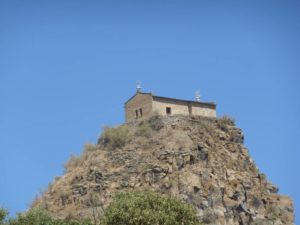 Axum is also the site of the church of St. Mariam of Zion, in front of which kings were crowned even as late as the last century.

Inside, there are displays of golden crowns and crosses, the latter of which are still used during the major festivals of the Ethiopian Orthodox Church.

Legend has it that the original Ark of the Covenant is housed in a chapel near the church. The Ark is believed to have been brought back by Menelik I on his return from Jerusalem.

Around the small town, many archeological sites like palace ruins and underground tombs of former kings can be seen.

The residues of the probably first capital of the Axumite Empire are found some 50 km northeast of Axum.

Nowadays you can see in Yeha only the quite well preserved ruins of a big temple with high religious importance. In the surrounding areas lots of archeological treasures are still undiscovered.

Visit Axum with us :