You are here: Home1 / Sights2 / Rock-hewn churches of Tigray 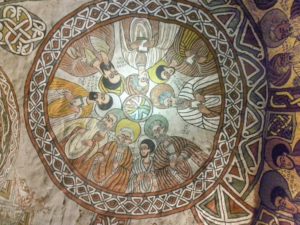 Painted ceiling in a rock-hewn church

Some of the more 200 churches are easy to access, while others, on the other hand, lay hidden in mountainous areas and only accessible through rock climbing.

All churches offer breath-taking views of their surrounding area. That’s what make visiting them such a unique experience !

Of all existing churches, those identified below can be accessed more or less easily.

Built in the 10th century, this church is the finest of all churches in the region on an architectural level.

Its size and cross-shaped built make for a striking interior, while its rock-hewn ceiling is supported by 13 finely-decorated pillars and arcs. 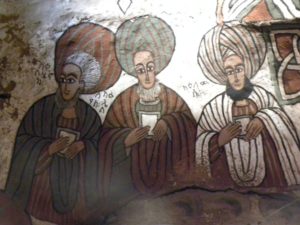 Wall paintings of saints and apostles

After a 40 minute walk, your reward will be a church carved entirely out of a single rock that hangs over the Hawzien Valley and the village of Degum.

What makes its interior really unique are six cross-shaped pillars that support the ceiling, and the rich decorative paintings of saints and apostles that adorn the walls of the tabernacle and the dome.

A one-meter wide wooden screen from the 15th century made up of 34 panels, each one depicting a saint, ranks among this church’s finest treasures.

Particularly easy to access, this church lays in the valley next to the village of Degum, and not in the high surrounding mountains like the other churches.

Degum Selassie is especially outstanding for its beautiful rock design and the collection of ancients paintings that adorn its walls.

The best known of this group of churches is Medhane Alem Adi Kasho. It is the most impressive in terms of size and building.

Petros & Paulos is another church notable for its primitive paintings of angels and saints.

Accessing the church involves a stiff climb but you will get rewarded with one of the most stunning views there is over the Gheralta region. 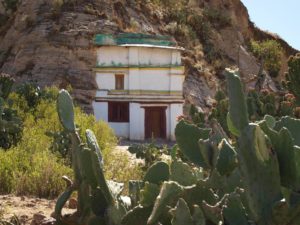 Reaching the church’s square after a one-hour climb will reward you with a magnificent sight over the Hawzien Valley.

Beautifully-adorned arches and a collection of old parchments, manuscripts and crosses make this difficult climb well worth it.

Easy to access, this church is a beautiful example of the Axumite style. The church is notable for the size of its building, its mural decorations and other rich ornaments.

Discover Tigray churches with us :