One of the most spectacular landscapes in the world : jagged peaks, deep valleys and sharp precipices.

The Simien Mountain is also home to extremely rare and endangered animals such as the Gelada babboon and Walia ibex. 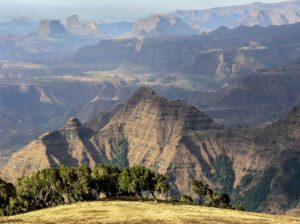 Simien means ‘North’ in Amharic. Six hundred million years ago, the mountains were an enormous volcanic massif, then rain and ice carved deep fissures into it and rivers have continued the work of erosion, creating an incredible landscape: high peaks and deep gorges.

The Simien Mountain massif is a broad plateau, cut off to the north and west by an enormous single drag over 60 kilometers long.

To the south, the tableland slopes gently down to 2,200 meters, divided by gorges 1,000 meters deep which can take more than two days to cross.

It also contains the highest peak of Ethiopia, the Ras Dashen, with 4620 m which is also the fourth highest mountain in Africa. The national Park has been declared by UNESCO World Heritage Site.

An incredible biodiversity with endemic species 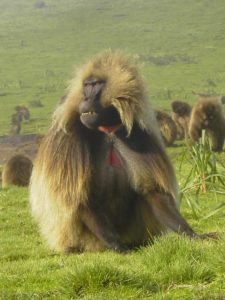 The Simien Mountains host a unique flora and fauna.

On the steep slopes the Walia- Ibex, Gelada baboons, Hamadryas baboon, Klipspringe, bushbucks and other endemic mountain animals may be seen. 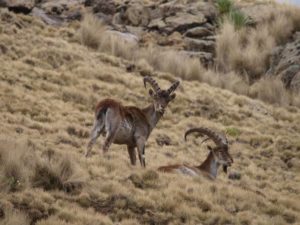 The most famous inhabitant is the rare red-colored Ethiopian Wolf. The National Park extends over the entire mountain massif of the Simien.

Visit and trekking in the Simien National Park 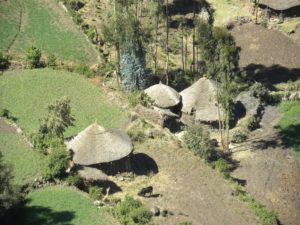 The Simien Mountains are a good place to do a short trekking excursion or a trekking tour of several days.

It can easily be reached in 3-4 hours from Gondar.

The fascinating panoramic views, the very special environment and the clear sky as well as the existence of rare animals found nowhere else in the world are worth a visit and a stay.

The Simien Lodge (also known as the Highest Hotel of Africa) situated on top of the massif at 3260 m, offers comfort and a splendid view.

Come trekking with us in the Siemien Mountains