You are here: Home1 / Sights2 / Religious festivals of Ethiopia

People dress in traditional costume and celebrate festivals across the country with colourful unique ceremonies such as Enkutatash (New Year), Meskel (Finding of the True Cross), Ledet (Christmas), Timket (Epiphany) and Fasika (Easter). 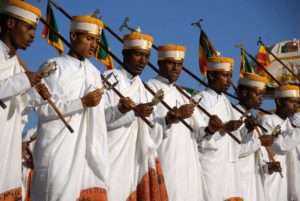 Timket is the greatest festival of the Ethiopian year, falling just 2 weeks after Ethiopian Christmas.

It is actually a 3-day affair preceded by the eve of Timket when the dramatic processions take place through a night of fasting, to the great day itself and the commemoration of Christ’s baptism in the Jordan River.

Ketera, the Eve of Timket is when the Priests bring out the Tabots – replicas of the 2 tablets of laws received by Moses, which are normally housed inside the altar symbolizing the Ark of the Covenant. 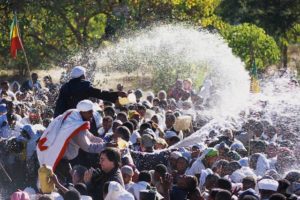 Priests bless the water of the pool or river where the next day’s celebration will take place.

It is the Tabot, rather than the church building which is consecrated and given extreme reverence. Visitors have the unique chance to experience a festival lost to the rest of the world.

If you travel during Timket in Ethiopia you are privileged to witness one of the most colourful and ancient festivals celebrated in Ethiopia, the Timket Festival. Commemorating the baptism of Jesus Christ, this is an extremely colorful three-day festival celebrated on the Ethiopian Calendar.

This is also one of the greatest and most colourful festivals on the Ethiopian calendar.

At Lalibela, it is celebrated with greater devotion, chanting, dancing, and singing around the rock-hewn churches of Lalibela which were built more than 800 years ago.

The ancient city of Lalibela will be filled with tens of thousands of pilgrims who come from all directions of Ethiopia and from all walks of life.

Most of the pilgrims reach at Lalibela from far off hamlets and inaccessible valleys, walking on their bare foot for days, weeks, and even for months to share the blessing on Christmas day.

Even though the Ethiopian Christmas is on January 7, there are different ceremonies held around the rock-hewn churches starting the night of 4th January.

This is an ancient Christian tradition which has remained unchanged for many years and witnessing this event, you will feel like you are transported centuries and centuries back in time. 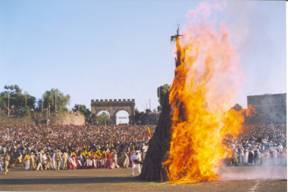 Meskel always have been celebrated in beautiful weather at the end of the rain season.

It is performed with a lot of dancing, feasting and lighting a massive bonfire to commemorate the discovery of the true cross on which Jesus Christ was crucified.

Meskel is second in importance. The word actually means “cross” and the feast commemorates when the cross of Christ was revealed to Empress Helena, mother of Constantine the Great.

They circle the “demera” and fling torches upon it while singing a special Meskel song.

Thousands gather at the Square to bid farewell to the rains and welcome in “Tseday” the spring season with its profuse “Meskel” daisies and golden sunshine.

It is not until dawn that the burning pyramid consumes itself entirely and the big tree at the center finally falls.

During the celebrations, houses are stocked with “tella” the local beer, and strangers are made welcome.

Orthodox Christians do not eat meat and diary products for the whole 55 days.

Vegetarian meals such as lentils, ground split peas, grains, fruit and varieties of vegetable stew accompanied by injera and/or bread are only eaten on these days.

The fist meal of the day is taken after 3 PM (9 o’clock in the afternoon Ethiopian time) during the fasting days, except Saturdays and Sundays, where a meal is allowed after the morning service.

On Easter eve people go to church and celebrate with candles which are lit during a colourful Easter mass service which begins at about 6 PM (12 o’clock in the evening Ethiopian time) and ends at about 2 AM (8 o’clock after mid-night Ethiopian time).

Everyone goes home to break the fast with the meat of chicken or lamb, slaughtered the previous night after 6 PM, accompanied with injera and traditional drinks (i.e. tella or tej).

Like Christmas, Easter is also a day of family meeting, an expression of good wishes with exchange of gifts (i.e. lamb, goat or loaf of bread).

Would you like to experience those unique Ethiopian celebrations ?

Our expert team will create a custom tour for you.